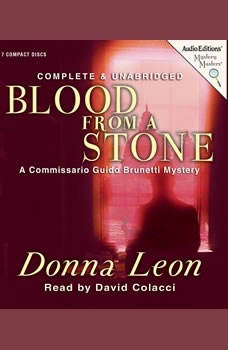 Blood from a Stone

On a cold Venetian night shortly before Christmas, a street vendor is killed in a scuffle in Campo San Stefano. The closest witnesses are the tourists who had been browsing the man's wares before his death-fake handbags of every designer label. The dead man had been working as a vu cumpra, one of the many African immigrants purveying goods outside normal shop hours and without work permits. Commissario Brunetti's response is that of everybody involved: Why would anyone kill an illegal immigrant? Once Brunetti begins to investigate this unfamiliar Venetian underworld, he discovers that matters of great value are at stake. Warned by Patta, his supervisor, to resist further involvement in the case, how far will Brunetti be able to penetrate the murky subculture of Venice's illegal community?

Blood from a Stone
A Commissario Guido Brunetti Myster...