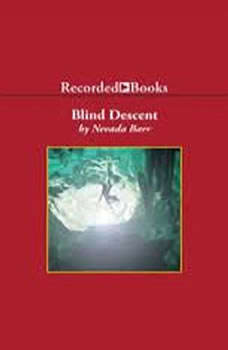 Award-winning author Nevada Barr fills the pages of Blind Descent with heart-stopping suspense, plots that twist around every corner, and spectacular wilderness settings. When park ranger Anna Pigeon embarks on a thrilling subterranean rescue mission, she confronts personal demons and a multitude of life-threatening dangers—not all of them from the hostile terrain. A fellow ranger is injured in a suspicious accident while exploring the mostly unmapped Lechuguilla Cavern in New Mexico’s Carlsbad Caverns. During a fleeting moment of consciousness, the victim calls for Anna. Battling her paralyzing fear of small spaces, Anna descends into the lifeless underworld to uncover what really happened. As Anna wriggles through cramped tunnels and climbs rocky precipices, she discovers treachery and destruction lurking in the inky black just beyond her headlamp. Veteran narrator Barbara Rosenblat provides the perfect voice for the courageous, but very human, park ranger and her colleagues.