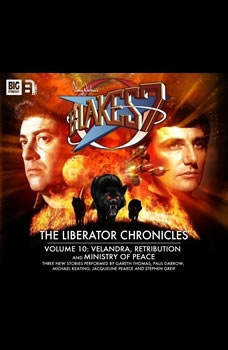 Three enhanced audiobooks performed by the stars of the classic BBC television series. Velandra by Steve Lyons Blake is having bad dreams: a swamp, wolves, a woman called Velandra and Travis. Could this be a memory that was erased by the Federation? Retribution by Andrew Smith A distress call leads Avon and Vila to an old tracking station on the moon of Lorean. It was sent by Ragnus Lang, formerly Vilas partner-in-crime. And now Lang needs Blakes help. Ministry of Peace by Una McCormack The Liberator crew are on the planet Speranza to assist its new interim government. But is the planet a beacon of hope in the fight against the Federation or is Speranzas history about to take a darker path? Stephen Greif, Paul Darrow, Jacqueline Pearce, Michael Keating, Paul Darrow, John Banks