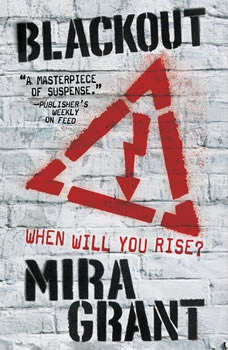 The explosive conclusion to the Newsflesh trilogy from New York Times bestseller Mira Grant. Rise up while you can. -- Georgia MasonThe year was 2014. The year we cured cancer. The year we cured the common cold. And the year the dead started to walk. The year of the Rising.The year was 2039. The world didn't end when the zombies came, it just got worse. Georgia and Shaun Mason set out on the biggest story of their generation. The uncovered the biggest conspiracy since the Rising and realized that to tell the truth, sacrifices have to be made.Now, the year is 2041, and the investigation that began with the election of President Ryman is much bigger than anyone had assumed. With too much left to do and not much time left to do it in, the surviving staff of After the End Times must face mad scientists, zombie bears, rogue government agencies-and if there's one thing they know is true in post-zombie America, it's this:Things can always get worse.BLACKOUT is the conclusion to the epic trilogy that began in the Hugo-nominated FEED and the sequel, DEADLINE. Newsflesh FeedDeadlineBlackoutFor more from Mira Grant, check out:ParasitologyParasiteSymbiont ChimeraNewsflesh Short FictionApocalypse Scenario #683: The BoxCountdownSan Diego 2014: The Last Stand of the California BrowncoatsHow Green This Land, How Blue This SeaThe Day the Dead Came to Show and TellPlease Do Not Taunt the Octopus

All the Pretty Little Horses
The Newsflesh Trilogy