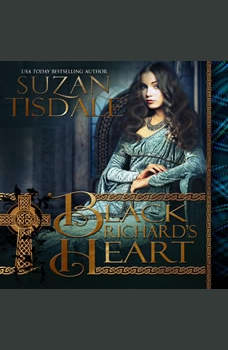 Nearly killed while trying to win back his ancestral home, Black Richard MacCullough is left scarred and mangled; but some scars run far deeper than mere skin. No longer the handsome devil or kind man of his youth, now he focuses solely on rebuilding everything that was lost to the brutal Chisolms and traitorous MacRays. Revenge -- while not nearly as important as keeping his clan from starving – is the only thing that keeps his bruised heart beating.

With his clan on the brink of starvation and annihilation, Black Richard doesn’t believe his life could get worse. Until King David II decides to put an end to the border wars himself, via a marriage between Black Richard and Aeschene MacRay, the daughter of his sworn enemy.

Locked away and all but forgotten because she is deemed imperfect and useless by her father, Aeschene MacRay holds no hope of ever having a husband and family of her own. But hope is the only thing she has left: hope that her vision will miraculously return and that she will regain her father’s approval.

But when news arrives that she is to be married off to the chief of her father’s enemy, she has only two choices: put her faith and hope in the monster that is Black Richard MacCullough or remain in the prison her father has created for her.

When you’ve lost everything, any risk is worth the taking.

Heart of Gold
by May McGoldrick

Return of the Rogue
by Donna Fletcher