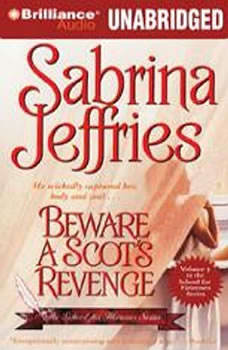 When Lady Venetia Campbell is kidnapped at pistol point by her father’s sworn enemy, Sir Lachlan Ross, she discovers the wickedly sexy Scot is even more intoxicating than she remembers . . . and much more dangerous. Lachlan plans to use her as a weapon against her father, but Venetia is determined that his lust for revenge will be trumped by an even more powerful desire. . . . “Irresistible . . . Larger-than-life characters, sprightly dialogue, and a steamy romance will draw you into this delicious captive/captor tale.” — Romantic Times (Top Pick!)

In the feuding English court, gentle Lady Madelyne suffered the cruel whims of her ruthless brother, Baron Louddon. Then, in vengeance for a bitter crime, Baron Duncan of Wexton — the Wolf — unleashed his warriors against Louddon's domai...

Don't Bargain with the Devil
School for Heiresses Series #5