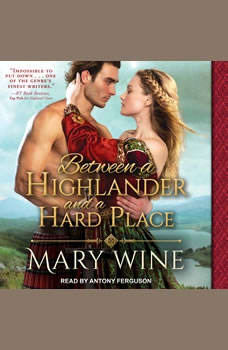 Between a Highlander and a Hard Place

Athena Trappes thinks she's in love . . . until she discovers the scoundrel only wanted her as his bit on the side. Enraged, she does what any spirited Englishwoman would do: set fire to his belongings, incur his dangerous wrath, and flee—immediately. With nowhere else to turn, she seeks freedom in the wilds of Scotland. Highland Laird Symon Grant lost his wife years ago, and it's his duty to find another. Athena is not exactly what the clan has in mind for him, but Symon's heart burns with unexpected passion for the woman who would risk everything to be free.

Wrongly accused of murdering his father, Drake Thornton MacDougall wanted nothing more than to strike back at his guilty, duplicitous half-brother. So he made the fiend pay by abducting his bride-to-be. But as Drake carried his captive off to a wind...

Cullen Duffie, a Highland warrior and charming rogue, is the new chief of Clan MacDonald. Determined to prove he's not his father, Cullen works to secure his clan against the English. When a woman washes onto Islay's shores, Cullen protects her from...

Another Chance to Dream
by Lynn Kurland

From Lynn Kurland, the New York Times bestselling author of the Nine Kingdom series.With neither title nor land, Rhys could not win the hand of Gwennelyn of Segrave. But he would always have her heart. The two are kindred souls...Rhys, a knight with...

Come Back to Me
by Josie Litton

After centuries of conflict, a peace treaty has finally been drawn between the warring Saxons and Norse — largely due to the wisdom and bravery of the legendary Viking leader Wolf Hakonson and the noble warrior Lord Hawk. Hawk and Wolf each ma...

Englishwoman, Grace Ellington, has made a home in Scotland, but to escape from the meddling people around her who seem to think she needs to wed right away—because women need saving, right?—she volunteers to journey north to aid a friend...

In her captivating new novel, bestselling author Lynn Kurland paints a magnificent portrait of 13th-century England--with the passionate tale of a woman crippled by the past and a man destined to future greatness....

On the run from a dangerous man, Ava Sutton flees to the Isle of Mull off the coast of Scotland. Masquerading as a titled, English lady, Ava must convince the cynical and darkly handsome chief of the Macleans of Aros to wed her before the devil trac...

She is the daughter of his enemy . . . and the keeper of his heart. Richard de Claiborne, the dark earl of Dunsmore, serves King Edward Plantagenet well. Sworn to obey his king's every order, he nevertheless chafes at the command he wed the daughte...

Between a Highlander and a Hard Pla...
Highland Weddings #5