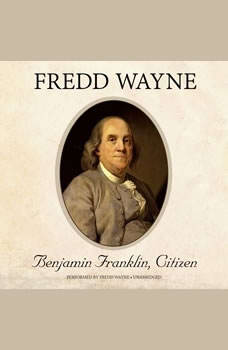 Ben Franklin's wisdom is just as potent now as it was more than two hundred years ago. A founding father of the United States, he was also a world citizen, a philosopher, author, and scientist. Fredd Wayne's brilliant performance reveals this genius with a sense of proportion that carefully balances excerpts from Franklin's public writings and his private correspondence.The first act is devoted to Franklin's life in Philadelphia, where we meet the politically savvy Ben, the inventor Ben, the entertaining Ben, the womanizing Ben, the father Ben. The second act in Paris shows Ben to be a complex man of vast intelligence, humor, and some brooding regrets.Wayne also portrays Franklin's common-law wife Deborah, his friend John Jay, his Parisienne mistress Madame Helvetia, and his illegitimate son William. As Franklin, Wayne sings a song to "My Plain Joan" and plays the glass harmonica, revealing yet another talent of a very real and lovable human being. In this exclusive production, Ben Franklin speaks to us all.