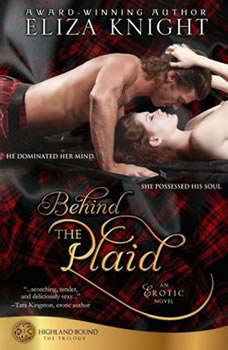 Emma Gordon escapes from a troubling marriage in which she has completely lost sight of who she is. Desperate for independence, she leaves her husband while on a trip in the Scottish Highlands. The only thing is, she ends up hurled back in time to the sixteenth-century Castle Gealach. Laird Logan Grant is tormented by a dark past and harbors a secret that could tear his country apart. Unable to resist Emma's beauty and the calm that she invokes, Logan confesses he desires her. Despite her own reservations, Emma longs to get close to Logan, even while she is desperate to return to her own era. In the end, she embarks on a daring, passionate affair that rocks her to the very core. Contains mature themes.

Behind the Plaid
Highland Bound #1