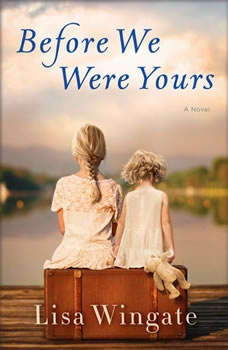 Before We Were Yours

For readers of Orphan Train and The Nightingale comes a “thought-provoking [and] complex tale about two families, two generations apart . . . based on a notorious true-life scandal.”*

Memphis, 1939. Twelve-year-old Rill Foss and her four younger siblings live a magical life aboard their family’s Mississippi River shantyboat. But when their father must rush their mother to the hospital one stormy night, Rill is left in charge—until strangers arrive in force. Wrenched from all that is familiar and thrown into a Tennessee Children’s Home Society orphanage, the Foss children are assured that they will soon be returned to their parents—but they quickly realize the dark truth. At the mercy of the facility’s cruel director, Rill fights to keep her sisters and brother together in a world of danger and uncertainty.

Aiken, South Carolina, present day. Born into wealth and privilege, Avery Stafford seems to have it all: a successful career as a federal prosecutor, a handsome fiancé, and a lavish wedding on the horizon. But when Avery returns home to help her father weather a health crisis, a chance encounter leaves her with uncomfortable questions and compels her to take a journey through her family’s long-hidden history, on a path that will ultimately lead either to devastation or to redemption.

Based on one of America’s most notorious real-life scandals—in which Georgia Tann, director of a Memphis-based adoption organization, kidnapped and sold poor children to wealthy families all over the country—Lisa Wingate’s riveting, wrenching, and ultimately uplifting tale reminds us how, even though the paths we take can lead to many places, the heart never forgets where we belong.

“A [story] of a family lost and found . . . a poignant, engrossing tale about sibling love and the toll of secrets.”—People

“Sure to be one of the most compelling books you pick up this year. . . . Wingate is a master-storyteller, and you’ll find yourself pulled along as she reveals the wake of terror and heartache that is Georgia Tann’s legacy.”—Parade

“One of the year’s best books . . . It is impossible not to get swept up in this near-perfect novel.”—The Huffington Post

If you liked the Century Trilogy, you’ll love the “extraordinary...monumental masterpiece” (Booklist) that changed the course of Ken Follett’s already phenomenal career.“Follett risks all and comes out a clear winner,&r...

This beautiful, illuminating tale of hope and courage is based on interviews that were conducted with Holocaust survivor and Auschwitz-Birkenau tattooist Ludwig (Lale) Sokolov—an unforgettable love story in the midst of atrocity.“The Ta...

Inspired by the life of a real World War II heroine, this powerful debut novel reveals an incredible story of love, redemption, and terrible secrets that were hidden for decades.  New York socialite Caroline Ferriday has her hands full with her...

The Fiery Cross
by Diana Gabaldon

The year is 1771. Claire Randall is still an outlander, out of place and out of time. But now she is linked by love to her only anchor--Jamie Fraser. They have crossed oceans and centuries to build a life together in North Carolina. But tensions, bo...

In an enthralling new historical novel from national bestselling author Kate Quinn, two women—a female spy recruited to the real-life Alice Network in France during World War I and an unconventional American socialite searching for her cousin...

“The book is like a salve. I think the world feels disordered right now. The count’s refinement and genteel nature are exactly what we’re longing for.” —Ann Patchett“How delightful that in an era as crude as ours ...

We have all heard attributes given to a certain elementary teacher or teachers when an individual attains a certain high level of success. For author, Lisa Wingate, it was her very special first grade teacher in Northboro, Massachusetts, named Mrs. Krackhardt. She saw talent in a shy little girl who had just transferred into her class. She read Lisa's stories to the class, and Lisa was hooked on the attention of an audience.

Even though writing was always a career goal, Lisa Wingate had other priorities to also accomplish. She decided to wait to pursue her writing career in earnest until she had graduated college, gotten married, held a position as a journalist and technical writer, and had children. She had wanted girls, but got two boys instead, and was immediately in love with each one.

One day when the first Wingate baby was small, Lisa's grandmother came for an extended stay visit. During that visit, her grandmother was sitting with the baby, when she began to tell Lisa the story of her life. They had interrupted the planting of flower beds to go inside to quiet the baby. It was that conversation that inspired Wingate to write the story, "Time for Tending Roses", which turned into her first mainstream novel, Tending Roses.

Today, Tending Roses, was the first of several books inspired by life and written during stolen moments of a busy mom, wife, and writer. She has said.......who knew all of that would come from a quiet afternoon with grandma and an unfinished flower bed?

Even though Tending Roses is her sentimental favorite, Lisa has treasured every book because they always begin with an inspiration from life, and she never knows where that inspiration will lead her in story.

The best thing an aspiring author can hear from a reader of their work is.......I wonder what happens next?