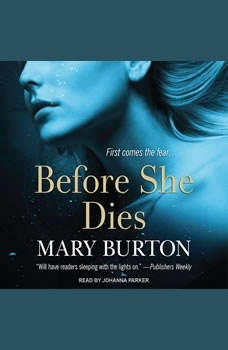 In death, they are purified. Holding his victims under water, he washes away their sins as they struggle for their last breath. Then he stakes their bodies to the ground, exposing them for what they really are: witches, sent to tempt and to corrupt. No one knows about defence attorney Charlotte Wellington's murdered sister, or about her childhood spent with the carnival that's just arrived in town. For Charlotte, what's past is past. But others don't agree. And as a madman's body count rises, she and Detective Daniel Rokov are drawn into a mission that's become terrifyingly personal.

After five long years in federal prison, Griff Burkett is a free man. But the disgraced Cowboys quarterback can never return to life as he knew it before he was caught cheating. Foster Speakman and his wife Laura lived a charmed life before fate de...

The Last Victim
by Karen Robards

FBI Special Agent Samantha Kennedy is haunted by her memories of the serial killer who abducted her. To keep the darkness at bay, she pretends to be a different, more confident woman. This Samantha doesn't fear every unknown face. So she throws caut...

The Seventh Victim
by Mary Burton

It's been seven years since the Seattle Strangler terrorized the city. His victims were all young, pretty, their lifeless bodies found wrapped in a home-sewn white dress. But there was one who miraculously escaped death, just before the Strangler...

NEW YORK TIMES BESTSELLER • From Linda Howard comes a thrilling and sensual new novel of romance, suspense, intrigue . . . and memories that can kill.   Lizette Henry wakes up one morning and makes a terrifying discovery: She doe...

FBI Special Agent Monica Davenport has made a career out of profiling serial killers. But getting inside the twisted minds of the cruel and sadistic has taken its toll: She's walled herself off from the world. Yet Monica can't ignore fellow agent Lu...