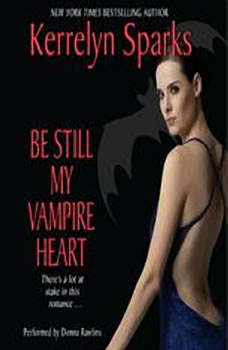 Be Still My Vampire Heart

If it was still beating. Angus MacKay has been undead for almost five hundred years and it's not often something, or someone, surprises him. Until Emma Wallace. The sight of this luscious agent from the CIA's elite Stake-Out team was enough to stop Angus in his tracks. But then he discovers that she's a vampire slayer, intent on killing the "monsters" who killed her parents. And it's Angus's job to stop her.The only good vampire is a dead vampire. It's been Emma's motto since she committed her life to the destruction of these things. Now Angus MacKay wants to convince her differently. Sure, he's a sexy Highland warrior who seems to have stepped off the cover of a romance novel, complete with brogue, kilt, and sword, but he's also one of them. And it's her job to kill him.The war is on, but will it end in the destruction of one or both of them . . . or in total surrender to a passion for the ages?

When Darkness Comes
by Alexandra Ivy

It's been a hell of a day for Abby Barlow. In just a few hours, she's survived an explosion, watched her employer die, had a startling dream, and now she finds herself in a seedy Chicago hotel with the sexy, unearthly Dante, a man she both desires a...

The first installment of Sherrilyn Kenyon's Dark-Hunter series, Night Pleasures.The Dark-Hunters are ancient warriors who have sworn to protect mankind and the fate of the world is in their hands. . .He is solitude. He is darkness. He is the ruler o...