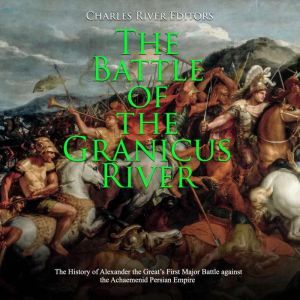 Battle of the Granicus River, The: The History of Alexander the Great's First Major Battle against the Achaemenid Persian Empire

At one point in antiquity, the Achaemenid Persian Empire was the largest empire the world had ever seen, but aside from its role in the Greco-Persian Wars and its collapse at the hands of Alexander the Great, it has been mostly overlooked. When it has been studied, the historical sources have mostly been Greek, the very people the Persians sought to conquer. Needless to say, their versions were biased, and attitudes about the Persians were only exacerbated by Alexander the Great and his biographers, who maintained a fiery hatred toward Xerxes I of Persia due to his burning of Athens.

Of course, far more is known about Alexander the Great and his military accomplishments, the most important of which was bringing about the demise of the Persian Empire. Ever since the famous Persian invasions that had been repelled by the Athenians at Marathon and then by the Spartans at Thermopylae and Plataea, Greece and Persia had been at odds. For the past few years they had enjoyed an uneasy peace, but that peace was shattered when, in 334 BCE, Alexander crossed the Hellespont into Persia. He brought with him an army of 50,000 infantry, 6,000 cavalry and a navy of over 100 ships, a mixed force of Macedonians, Greeks, Thracians and Illyrians, all chosen for their specific strengths (the Thessalians, for example, were famous cavalrymen). He was still just 22.

When Alexander crossed the Hellespont in 334 BCE, his first encounter with Persian forces took place along the Granicus River. The Persian commanders had met at the city of Zeleia along with Memnon of Rhodes, the leader of their Greek mercenary forces, and Memnon advised the Persians not to fight Alexander head on. Since the Persian forces were slightly outnumbered for the battle, Memnon advised that the Persians should scorch the nearby lands and make travel and supplying the army difficult for Alexander.