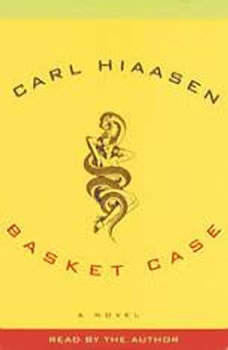 Once a hotshot investigative reporter, Jack Tagger now bangs out obituaries for a South Florida daily, “plotting to resurrect my newspaper career by yoking my byline to some famous stiff.” Jimmy Stoma, the infamous front man of Jimmy and the Slut Puppies, dead in a fishy-smelling scuba “accident,” might be the stiff of Jack’s dreams—if only he can figure out what happened.

Standing in the way are (among others) his ambitious young editor, who hasn’t yet fired anyone but plans to “break her cherry” on Jack; the rock star’s pop-singer widow, who’s using the occasion of her husband’s death to re-launch her own career; and the soulless, profit-hungry owner of the newspaper, whom Jack once publicly humiliated at a stockholders’ meeting.

With clues from the dead rock singer’s music, Jack ultimately unravels Jimmy Stoma’s strange fate—in a hilariously hard-won triumph for muckraking journalism, and for the death-obsessed obituary writer himself.

The Nanny Diaries
by Emma McLaughlin

Read by Julia RobertsBased on the real-life experiences, the inside story on the real lives of the rich and privileged from the women who know all the secrets - the nannies.The Nanny Diaries deftly skewers the manner in which America's over-privileg...

Marine biologist Nate Quinn is in love with the majestic ocean-dwelling behemoths who have been singing their haunting song for twenty million years. But why do the humpback whales sing? That's the question that has Nate and his crew filming, ...

Holidays on Ice
by David Sedaris

David Sedaris's beloved holiday collection is new again with six more pieces, including a never before published story. Along with such favorites as the diaries of a Macy's elf and the annals of two very competitive families, are Sedaris's tales of...

Sophie Kinsella has conquered the hearts of millions with her New York Times bestselling Shopaholic novels, which feature the irresistible one-woman shopping phenomenon Becky Bloomwood. Now Becky’s back in a hilarious, heartwarming tale of ma...

The Extravaganza of the Seas is a five-thousand-ton cash cow, a top-heavy tub whose sole function is to carry gamblers three miles from the Florida coast, take their money, then bring them back so they can find more money. In the middle of a tropica...

“Joyland is a breathtaking, beautiful, heartbreaking book....Even the most hardboiled readers will find themselves moved” (Charles Ardai, Edgar- and Shamus Award-winning editor of Hard Case Crime).Set in a small-town North Carolina amuse...

Faking It
by Jennifer Crusie