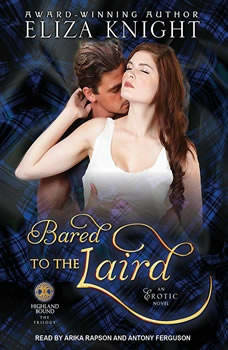 Bared to the Laird

Overwhelmed by her new life in another era with the Laird of Gealach, and the feelings that threaten to consume her, Emma determines she must return to her own time and a semblance of sanity. Having heard of a magical circle of stones atop the ridge overlooking Loch Ness, she manages to escape from the castle and the desire and intensity of Logan that's held her captive. When Logan realizes Emma is missing, he is enraged and terrified. He seeks to find her, and when he does, he will punish her exquisitely for leaving him and for inexplicably exposing his scorching fascination and adoration. Contains mature themes.