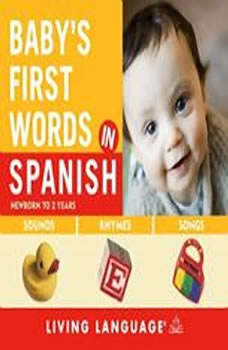 Baby’s First Words in Spanish introduces your baby to the Spanish language through sweet and soothing songs, rhymes, and words. Decades of research prove that the first two years of a baby’s life are the crucial time to expose him or her to a second language. Don’t miss this window of opportunity!

Baby’s First Words in Spanish is designed for newborns to toddlers up to two years old. Visit www.livinglanguage.com for a lyric sheet so that parents can join in, too!