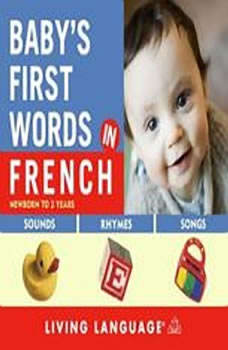 Baby’s First Words in French introduces your baby to the French language through sweet and soothing songs, rhymes, and words. Decades of research prove that the first two years of a baby’s life are the crucial time to expose him or her to a second language. Don’t miss this window of opportunity!

Baby’s First Words in French is designed for newborns to toddlers up to two years old. Visit www.livinglanguage.com for a lyric sheet so that parents can join in, too!

Earworms MBT is a revolutionary accelerated technique that takes the hard work out of learning a new language. By repeatedly listening to melodies specially composed with rhythmic repetitions of French and English, you will pick up essential words a...

Starting Out in French
by Living Language

Vivez bien, aimez beaucoup, riez souvent. (Live well, love much, laugh often.) As a French language learner, you know that there is something magical about being able to express yourself in this beautiful language. Now Behind the Wheel French 2 invi...

"Let’s Talk We will have you speaking French in no time! Lingo Jump's parallel audio language learning system makes it easy to learn languages at your leisure. Whether you're relaxing or on the go, our simple, clear, and fun audio lessons hel...

Everything you need to learn French, simply and conveniently — put that commuting time to good use!Drive Time French is the easiest way to learn French vocabulary, grammar, pronunciation, conversation and even culture without a book. This inno...

French in Minutes
by Made for Success

Learn how to study French! Imagine if you could instantly build your foreign language skills and have fun at the same timenow you can. TheFrenchin Minutes Instant Language series takes a fun, entertaining, and scientific approach to learningFrench....

Behind the Wheel French Level 1 covers beginning to intermediate level French, providing a flexible, solid and universal foundation in speaking, understanding, and creatively expressing yourself in French. The program features an English speaking in...

Earworms MBT is a revolutionary accelerated technique that takes the hard work out of learning a new language. By repeatedly listening to melodies specially composed with rhythmic repetitions of French and English, you will pick up essential words a...

LEARN FRENCH ON THE GO–LEARN ANYWHEREIf you have trouble finding time to fit in language lessons, All-Audio French is the perfect solution. Developed by the experts at Living Language®, this program is designed for people on the move. You...