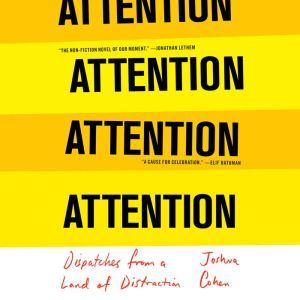 ATTENTION: Dispatches from a Land of Distraction

“The nonfiction novel of our moment.”—Jonathan Lethem

A wide-ranging, rule-bending collection from “a major American writer” (The New York Times)—reclaiming the power of attention in an age of constant distraction

Throughout ATTENTION, Cohen directs his sharp gaze at home and abroad, calling upon his extraordinary erudition and unrivaled ability to draw connections between seemingly unlike things to show us how to live without fear in a world overflowing with information. In each piece, he projects a quality of thought that is uniquely his, and a voice as witty, profound, and distinct as any in American letters.

At this crucial juncture in history, ATTENTION is a guide for the perplexed—a handbook for anyone hoping to bring the wisdom of the past into the culture of the future.

“Dazzling in its scope . . . If curiosity is a writer’s greatest innate gift, Joshua Cohen may be America’s greatest living writer.”—The Washington Post

“Prescient . . . Attention reveals a fresh, vital literary voice as it covers seemingly every imaginable topic relating to modern life, both at home and abroad.”—Entertainment Weekly

“Whip-sharp . . . Cohen here flaunts a next-level virtuosity across countless fields of expertise. . . . [He] is a phenomenal thinker whatever the theme whatever the subject: granular, acrobatic, startling.”—The Guardian

“These essays are the cat’s meow.”—Kirkus Reviews