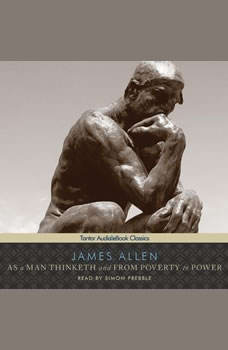 As a Man Thinketh and From Poverty to Power

James Allen's From Poverty to Power (1901) and As a Man Thinketh (1902) stand as seminal texts in the self-help genre that have served as sources of inspiration since their publication at the beginning of the twentieth century. Loosely based in its principles around the Biblical proverb "As a man thinketh in his heart, so is he," As a Man Thinketh asserts the powerful idea that belief is central to bringing about positive events in one's life. From Poverty to Power, Allen's first book, relies on a similar philosophy but addresses themes of adversity and suffering more directly and offers his simple wisdom as a means of overcoming difficulty. Allen's writings are powerful and relevant today as they were over a century ago, and this collection brings their solace and inspiration to modern listeners.

101 Essays That Will Change The Way Y...
by Brianna Wiest

The Energy Bus
by Jon Gordon

The Top 1%
by Dan Strutzel

The Five Levels of Attachment
by don Miguel Ruiz Jr.