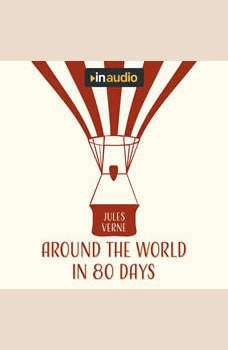 Around the World in 80 Days

In Around the World in Eighty Days, Phileas Fogg rashly bets his companions £20,000 that he can travel around the entire globe in just eighty days -- and he is determined not to lose. Breaking the well-established routine of his daily life, the reserved Englishman immediately sets off for Dover, accompanied by his hot-blooded French manservant, Passepartout. Traveling by train, steamship, sailboat, sledge, and even elephant, they must overcome storms, kidnappings, natural disasters, Sioux attacks, and the dogged Inspector Fix of Scotland Yard to win the extraordinary wager. Combining exploration, adventure, and a thrilling race against time, Around the World in Eighty Days gripped audiences upon its publication and remains hugely popular to this day.

Jules Verne was born on February 8, 1828 in Nantes, France. In Paris, Verne studied law but chose to pursue literature. In 1850 his play, Les Pailles Rompues ("The Broken Straws"), was successfully produced at Alexandre Dumas's Theatre Historique. He served as secretary at the Theatre Lyrique (1852-54) and later became a stockbroker but continued writing. He died on March 24, 1905, in Amiens, France, leaving behind a legacy of science fiction works, including Journey to the Center of the Earth.