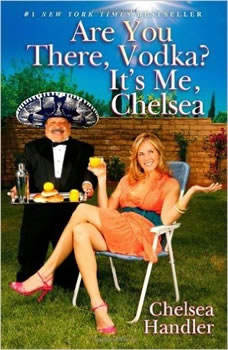 Are You There, Vodka? It's Me, Chelsea

In My Horizontal Life, actress and stand-up comedian Chelsea Handler boldly recounted her one-night stands-the good, the bad, and the disastrous. In this wickedly honest new work, she casts the net wider with even funnier results, recalling the most noteworthy highs and lows of her life to date--including her efforts to diversify by dating red-haired men, her obsession with midgets, and the dog-sitting interlude in which her boyfriend became overly familiar with a Peekapoo. Whether it's a vacation with her dad during which he tells airline staff they're a honeymoon couple in order to get an upgrade, or her elaborate attempts to convince her third-grade classmates that she's starring in a Private Benjamin sequel, Chelsea lets it rip in these relentlessly entertaining essays. Displaying the candor and irresistible turn of phrase that have earned her a recurring stint as a correspondent on The Tonight Show as well as her own E! series, Chelsea Lately, this deliciously skewed collection is a guilty pleasure.

Not my cup of tea. Too much yelling. Not a story as such but more of a comedy act. I really don't care for this at all. Perhaps you will find something funny in all of her ranting and raving.