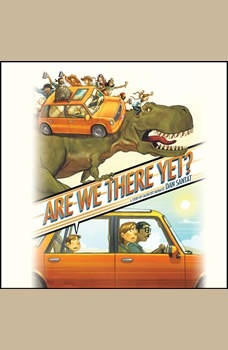 Are We There Yet?

Caldecott Medalist Dan Santat takes listeners on the road trip of a lifetime!"Are we there yet?" Every parent has heard this classic kid question on a long car ride--and after listening to this astonishingly inventive new audiobook, you'll never look at being bored the same way again.Let's face it: everyone knows that car rides can be boring. And when things get boring, time slows down. In this audiobook, a boy feels time slowing down so much that it starts going backward--into the time of pirates! Of princesses! Of dinosaurs! The boy was just trying to get to his grandmother's birthday party, but instead he's traveling through Ancient Egypt and rubbing shoulders with Ben Franklin. When time flies, who knows where--or when--he'll end up.

Martha has a new favorite word.And that word is MINE! Martha has officially mastered apologizing. Unfortunately, she still has a lot to work on when it comes to sharing. And while she doesn't learn to love it, she does discover that having her toys...

On a trip to the farmers' market with her parents, Sophie chooses a squash, but instead of letting her mom cook it, she names it Bernice. From then on, Sophie brings Bernice everywhere, despite her parents' gentle warnings that Bernice will begin to...

Eight calming, fun, stories that develop imaginations and creativity and aim to help children calm and relax. The eighth track is a simple, peaceful relaxation or meditation activity. Each beautifully read story is accompanied by gentle musical back...

Move over, Junie B. Jones and Ivy & Bean! Here comes a lovably energetic little sister with a BIG personality--and an imagination to match! As the youngest in her family, Dory really wants attention, and more than anything she wants her brother and...

Show your little one the sights of the world and the magic of where imagination can take in this darling expanded retelling of Jack and Jill. Diddle, Diddle, Dumpling celebrates the individuality of children and the love of play! From John who goes ...

The unforgettable bestseller Wonder, now a major motion picture, has inspired a nationwide movement to Choose Kind. Now parents and educators can introduce the importance of choosing kind to younger readers with this gorgeous picture book,...

Gooney the Fabulous
by Lois Lowry

Gooney Bird Greene has a fabulous idea after her teacher reads fables to the class. The children learn that fables are stories with animal characters that teach something important. Gooney’s fabulous idea is that each student create their own ...