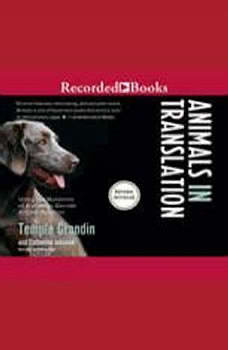 Animals in Translation: Using the Mysteries of Autism to Decode Animal Behavior

Temple Grandin’s professional training as an animal scientist and her history as a person with autism have given her a perspective like that of no other expert in the field. Grandin and coauthor Catherine Johnson present their powerful theory that autistic people can often think the way animals think—putting autistic people in the perfect position to translate “animal talk.” Exploring animal pain, fear, aggression, love, friendship, communication, learning, and, even animal genius, Grandin is a faithful guide into their world. Animals in Translation reveals that animals are much smarter than anyone ever imagined, and Grandin, standing at the intersection of autism and animals, offers unparalleled observations and extraordinary ideas about both.

There are so many benefits to learning how to communicate with animals. Love, trust, a spiritual connection that goes to the heart of the human-animal bond. Every time I listen to them, I learn about myself.We seem to need animals in our disconnecte...