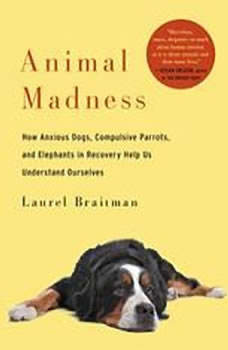 Animal Madness: How Anxious Dogs, Compulsive Parrots, Gorillas on Drugs, and Elephants in Recovery Help Us Understand Ourselves

Charles Darwin conjured his evolutionary ideas by looking at physical differences in Galapagos finches and fancy pigeons (among other species). Alfred Russell Wallace developed similar theories while investigating the geographic distribution of a range of creatures in the Amazon Basin and the Malay Archipelago. Laurel Braitman got her lessons closer to home, learning about evolution by watching her dog. Oliver was a stunningly beautiful and charming Bernese mountain dog. But he was also insane and much to Braitman's horror, he became her guide to the complexities of the disturbed canine mind. For one thing, he was terrified of thunderstorms. But worse than that—and far more confounding—Oliver snapped at flies that only he could see, ate Ziploc bags (including the contents), towels, and cartons of eggs. He suffered such debilitating separation anxiety, was prone to eruptions of aggression, compulsively licked his front paws until they were bare and oozy, and may even have attempted suicide. Though her experience with Oliver was heartbreaking, his emotional extremes, mental disturbances, and responses to drugs like Valium and Prozac, forced her to acknowledge a form of evolutionary continuity between humans and animals that, as a college biology major and a PhD graduate from MIT, she had never been taught in school. Nonhuman animals lose their minds. And when they do, they do it a lot like us. Over the past three years Braitman has traveled all over the world in search of disturbed animals and the people who care for them. She also spent months in the archives of the nation’s oldest natural history museums and zoos reading letters, journals, field notes, and books by famed field biologists, naturalists, curators and zookeepers of the nineteenth and twentieth centuries. In Animal Madness she includes the stories of some of the first creatures to come to the United States and very publicly lose their minds—such as Johnny Gorilla, a baby gorilla captured in Gabon and sold to a family that raised him like a human child in London. After all of the digging in the archives of museums and zoos, the years of travel, the nights spent on boats and in forest huts, the weeks synthesizing scientific literature, and the hours watching, waiting or prowling around the edges of dog parks, lagoons, zoos or amusement parks observing, Braitman discovered that mental illness in animals happens all the time and when it does, it demonstrates that we humans are closely related—and in truly astonishing and heartbreaking ways—to other creatures more than we think. We may look different on the outside, but when it comes to the most ancient parts of our brains, we share more than we might imagine. The ties that bind, in this case, are also the ties that just happen to make us crazy in astonishingly similar ways.