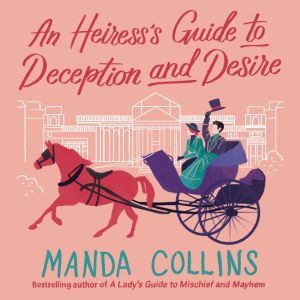 An Heiress's Guide to Deception and Desire

Former lovers become reluctant allies in this delightfully witty historical rom-com from the bestselling author of A Lady's Guide to Mischief and Mayhem—for fans of Evie Dunmore, Enola Holmes, and Netflix's Bridgerton!

England, 1867: As half of the writing duo behind England’s most infamous crime column, Miss Caroline Hardcastle has quite the scandalous reputation. It may have cost her a fiancé, but she would much rather bring attention to crimes against those ignored by society than worry about what the ton thinks of her.

After Caro’s dear friend is kidnapped, however, she has no choice but to work with Lord Valentine Thorn, the same man who broke her heart. Worse, when her actions put her father’s business at risk, a marriage of convenience may be her only solution . . . but can she trust Val to stand by her? Or will their past repeat itself?

Val—the new Viscount Wrackham—is in an untenable position: His father is demanding he find a respectable bride to secure the succession. Yet the only woman he’s ever loved, Miss Caroline Hardcastle, is notorious for behaving improperly. And she’s never forgiven him for his youthful transgressions, missteps made in the name of familial duty, but ones he still regrets to this day.

As they grow closer to unmasking the culprit, Val sees an opportunity to show Caro he’s a changed man. But can he convince her to give their love a second chance—before death does them part?