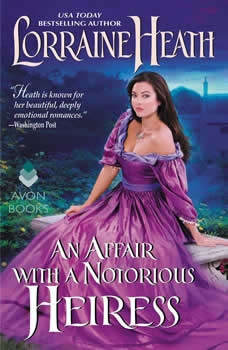 An Affair with a Notorious Heiress

The son of a duke and an infamous mother, Alistair Mabry, Marquess of Rexton, fought his way to respectability. Now, the most eligible bachelor in London, marriage-shy Rexton will take only a wife with an impeccable reputation, good breeding, and a penchant for staying out of the gossip sheets. But when he strikes a deal to be seen “courting” a sweet young debutante whose notorious older sister has blemished her chances for marriage, Rexton is unexpectedly drawn to the highly inappropriate, calamitous Tillie, Lady Landsdowne herself.After a scandalous incident that sent shockwaves throughout society and disgraced her, Tillie refuses to cower in the face of the ton. Instead, she will hold her head high as she serves as chaperone for her younger sister, but Tillie is convinced Rexton’s courtship is shrouded with secrets—ones she vows to uncover. However, doing so requires getting dangerously close to the devilishly handsome and forbidden marquess…

The Viscount and the Vixen
by Lorraine Heath

Love begets madness. Viscount Locksley watched it happen to his father after his cherished wife’s death. But when his sire arranges to marry flame-haired fortune hunter Portia Gadstone, Locke is compelled to take drastic measures to stop the ...

Do You Want to Start a Scandal
by Tessa Dare

On the night of the Parkhurst ball, someone had a scandalous tryst in the library. Was it Lord Canby, with the maid, on the divan? Or Miss Fairchild, with a rake, against the wall? Perhaps the butler did it.All Charlotte Highwood knows is this: it ...

If the Viscount Falls
by Sabrina Jeffries

The heir presumptive to the Viscount Rathmoor, Dominick Manton once had his heart's desire within reach—a bright future as a barrister and engagement to Jane Vernon. Then a shattering betrayal by his vindictive brother George snatched away Dom...

The Earl Takes All
by Lorraine Heath

One summer night, Edward Alcott gives in to temptation and kisses Lady Julia Kenney in a dark garden. However, the passion she stirs within him is best left in the shadows as she weds his twin, the Earl of Greyling. But when tragedy strikes, to hon...