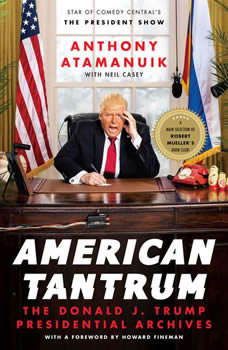 In American Tantrum, the star of Comedy Central’s acclaimed The President Show opens the vault and releases Donald J. Trump’s presidential archives. The result is a devastatingly hilarious audiobook that gets closer to truth than any nonfiction account, voiced by the author, Anthony Atamanuik, with guests Neil Casey, Kathy Griffin, Tom Arnold, John Gemberling, and Lennon Parham.The Presidential Archives. Every other president has made a mess of it. Barack Obama is currently spending millions of dollars (probably trillions, if you want to know the truth) building a monument to himself. And they don’t even charge admission at these places! No wonder this country is a zillion dollars in debt. And what’s the point?!: These guys are already out of office and old news. We hate to say it, folks, but the presidential library is totally broken and needs to be made great again.America, we herewith present the FIRST AND ONLY presidential library to be released in real time, while the president is still in office. (Why delay?!) But wait, THERE’S MORE! Who wants the hassle of having to go to some boring building in the middle of nowhere? (The Eisenhower Library is in Abilene, Kansas – yikes!) What if you could have your favorite president’s library delivered to your home, today! THAT’S NOT ALL! What if you could carry that library with you EVERYWHERE!Introducing THE DONALD J. TRUMP PRESIDENTIAL ARCHIVES: VOLUME 1. It’s all here: the 45th U.S. president’s letters, diaries, Oval Office recordings, Moscow hotel tapes, grand jury testimony, sealed indictments, financial records, subpoenas, dossiers, AND SO MUCH MORE! It’s available now at the AMAZING PRICE of $20.99!* Never has wisdom been so accessible!It’s the last audiobook you will ever need to buy. Or maybe just the last audiobook published, period. Get yours NOW before the first amendment is abolished!*Offer not valid to employees of the U.S. Department of Justice. Don’t miss VOLUME 2: THE PRISON YEARS – coming soon! Hopefully!