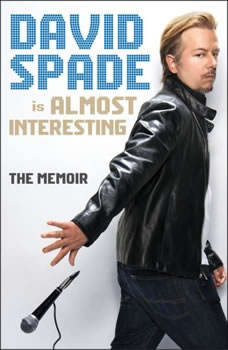 A hilarious and biting memoir from the actor, comedian and Saturday Night Live alumni.David Spade is best known for his harsh "Hollywood" Minute Sketches on SNL, his starring roles in movies like Tommy Boy and Joe Dirt, and his seven-year stint as Dennis Finch on the series Just Shoot Me. Now, with a wit as dry as the weather in his home state of Arizona, the "comic brat extraordinaire" delivers a memoir.Spade takes fans back to his childhood as a wannabe cool younger brother and recounts his excruciating road-tour to fame—when he was regularly mistaken for a fourteen year-old. He dishes about his time on SNL during the beloved Rock/Sandler/Farley era of the 1990s, and brags about the ridiculous perks that fame has brought into his life, including a crazy assistant who attacked him while he was sleeping, being threatened on the street in Beverley Hills by Eddie Murphy, and being one of the shortest guys at the Playboy mansion (the views weren’t bad).Sometimes dirty, sometimes just plain silly, David Spade reminds us what made him one of our favorite funny people.

From actor Cary Elwes, who played the iconic role of Westley in The Princess Bride, comes a first-person account and behind-the-scenes look at the making of the cult classic film filled with never-before-told stories, exclusive photographs, and inte...

Charlamagne Tha God—the self-proclaimed “Prince of Pissing People Off,” co-host of Power 105.1’s The Breakfast Club, and “hip-hop’s Howard Stern”—shares his unlikely success story as well as how embrac...

Megan Mullally and Nick Offerman reveal the full story behind their epic romance--presented in a series of intimate conversations between the couple.The year: 2000. The setting: Los Angeles. A gorgeous virtuoso of an actress agreed to star in a rand...

Stories I Only Tell My Friends
by Rob Lowe

A wryly funny and surprisingly moving account of an extraordinary life lived almost entirely in the public eyeA teen idol at fifteen, an international icon and founder of the Brat Pack at twenty, and one of Hollywood's top stars to this day, Rob Low...

This program includes a prologue and epilogue read by the author.From New York Times culture reporter Dave Itzkoff, comes the definitive audiobook biography of Robin Williams – a compelling portrait of one of America’s most beloved and m...

My Voice
by Angie Martinez

THE NEW YORK TIMES BESTSELLERAngie Martinez is the “Voice of New York.” Now, for the first time, she candidly recounts the story of her rise to become an internationally celebrated hip hop radio icon.   In her current reign at Power...

Nominated for a 2014 Grammy in the Spoken Word category!Hilarious and heartfelt observations on aging from one of America's favorite comedians, now that he's 65, and a look back at a remarkable career.Billy Crystal is 65, and he's not happy about it...

This program is read by the authorA guide to all kinds of addiction from a star who has struggled with heroin, alcohol, sex, fame, food and eBay, that will help addicts and their loved ones make the first steps into recovery“This manual for se...

Born Standing Up
by Steve Martin

The Emmy and Grammy Award-winner's candid, spectacularly amusing memoir of his years in stand-up In the mid-seventies, Steve Martin exploded onto the comedy scene. By 1978 he was the biggest concert draw in the history of stand-up. In 1981 he quit...