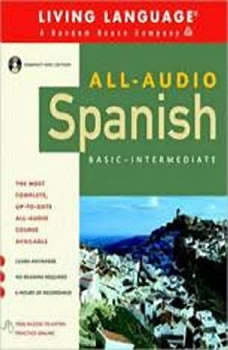 LEARN SPANISH ON THE GO–LEARN ANYWHERE
If you have trouble finding time to fit in language lessons, All-Audio Spanish is the perfect solution. Developed by the experts at Living Language®, this program is designed for people on the move. You can learn Spanish as you drive, work around the house, or exercise at the gym.

VOCABULARY–GRAMMAR–DIALOGUES–CULTURE
Begin with vocabulary and grammar basics before hearing a lively dialogue that includes the most current Spanish idioms and usage. Interactive exercises reinforce what you’ve learned. You’ll also learn some intriguing facts about Spanish customs and culture.