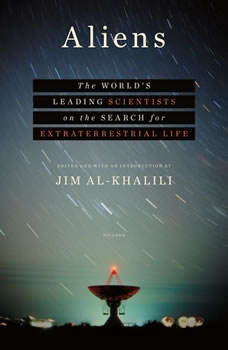 Aliens: The World's Leading Scientists on the Search for Extraterrestrial Life

In these lively and fascinating essays, scientists from around the world weigh in on the latest advances in the search for intelligent life in the universe and discuss just what that might look like. Since 2000, science has seen a surge in data and interest on several fronts related to E.T. (extraterrestrials); A.I. (artificial intelligence); and SETI (search for extraterrestrial intelligence). The debate has intensified over whether life exists outside our solar system, what that life would look like, and whether we’ll ever make contact.

Included in this audiobook are essays from a broad spectrum of the scientific community: cosmologists, astrophysicists, NASA planetary scientists, and geneticists, to name just a few, discussing the latest research and theories relating to alien life. Some of the topics include: If life exists somewhere in space, what are the odds that it evolves into something we would recognize as intelligent? What will space travel look like in the future, and will it all be done by cyborg technology? How long until we are ruled by robot overlords? (This is actually a serious consideration.) Are we simply a simulation in the mind of some supreme being, acting out a virtual reality game?

For those who have ever wondered, Is there anybody out there? here are the latest theories and evidence that move us closer to answering that question.

Every day, scientists conduct pioneering experiments with the potential to transform how we live. Yet it isn't every day you hear from the scientists themselves! Now, award-winning author Jim Al-Khalili and his team of top-notch experts explain how ...

The latest volume in the bestselling series from Edge.org—dubbed “the world’s smartest website” by The Guardian—brings together 175 of the world’s most innovative and brilliant thinkers to discuss recent scientif...

Living at the limits of our ordinary perception, mosses are a common but largely unnoticed element of the natural world. Gathering Moss is a beautifully written mix of science and personal reflection that invites listeners to explore and learn from ...

What scientific concept would improve everybody's cognitive toolkit? This is the question John Brockman, publisher of Edge.org, posed to the world's most influential thinkers. Their visionary answers flow from the frontiers of psychology, philosophy...

An all-encompassing guide to skeptical thinking from podcast host and academic neurologist at Yale University School of Medicine Steven Novella and his SGU co-hosts, which Richard Wiseman calls "the perfect primer for anyone who wants to separate f...

In This Explains Everything, John Brockman, founder and publisher of Edge.org, asked experts in numerous fields and disciplines to come up with their favorite explanations for everyday occurrences. Why do we recognize patterns? Is there such a thing...

Science in the Soul
by Richard Dawkins

NEW YORK TIMES BESTSELLER • The legendary biologist and bestselling author mounts a timely and passionate defense of science and clear thinking with this career-spanning collection of essays, including twenty pieces published in the United Stat...

The latest volume in the bestselling series from Edge.org—dubbed “the world’s smartest website” by The Guardian—brings together 206 of the world’s most innovative thinkers to discuss the scientific concepts that ...

In The Distracted Mind leading psychologist Larry Rosen, and pioneering neuroscientist Adam Gazzaley, explain why our minds have become addicted to email, text messages, virtual worlds and social media such as Facebook and Twitter. Through compellin...