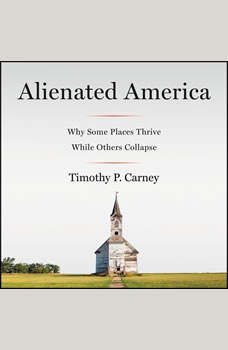 Alienated America: Why Some Places Thrive While Others Collapse

Respected conservative journalist and commentator Timothy P. Carney continues the conversation begun with Hillbilly Elegy and the classic Bowling Alone in this hard-hitting analysis that identifies the true factor behind the decline of the American dream: it is not purely the result of economics as the left claims, but the collapse of the institutions that made us successful, including marriage, church, and civic life.During the 2016 presidential campaign, Donald J. Trump proclaimed, “the American dream is dead,” and this message resonated across the country.Why do so many people believe that the American dream is no longer within reach? Growing inequality, stubborn pockets of immobility, rising rates of deadly addiction, the increasing and troubling fact that where you start determines where you end up, heightening political strife—these are the disturbing realities threatening ordinary American lives today.The standard accounts pointed to economic problems among the working class, but the root was a cultural collapse: While the educated and wealthy elites still enjoy strong communities, most blue-collar Americans lack strong communities and institutions that bind them to their neighbors. And outside of the elites, the central American institution has been religion.That is, it’s not the factory closings that have torn us apart; it’s the church closings. The dissolution of our most cherished institutions—nuclear families, places of worship, civic organizations—has not only divided us, but eroded our sense of worth, belief in opportunity, and connection to one another.In Alienated America, Carney visits all corners of America, from the dim country bars of Southwestern Pennsylvania., to the bustling Mormon wards of Salt Lake City, and explains the most important data and research to demonstrate how the social connection is the great divide in America. He shows that Trump’s surprising victory was the most visible symptom of this deep-seated problem. In addition to his detailed exploration of how a range of societal changes have, in tandem, damaged us, Carney provides a framework that will lead us back out of a lonely, modern wilderness.

Nobody
by Marc Lamont Hill

Protests in Ferguson, Missouri, and across the United States following the death of Michael Brown revealed something far deeper than a passionate display of age-old racial frustrations; they unveiled a public chasm that has been growing for years, a...

Five hundred feet underground, Jeanne Marie Laskas asked a coal miner named Smitty, “Do you think it’s weird that people know so little about you?” He replied, “I don’t think people know too much about the way the whole...

“A Perfect Storm for a new generation, Rachel Slade's Into the Raging Sea is a masterful page-turning account of the El Faro's sinking.”—Ben Mezrich, bestselling author of The Accidental Billionaires: The Found...

From the beet fields of North Dakota to the wilderness campgrounds of California to an Amazon warehouse in Texas, people who once might have kicked back to enjoy their sunset years are hard at work. Underwater on mortgages or finding that Social Sec...

In Capital, Commonwealth Prize-winning author Rana Dasgupta examines one of the great trends of our time: the expansion of the global elite. Capital is an intimate portrait of the city of Delhi which bears witness to the extraordinary transmogrifica...

"If you want to know why international crooks and their eminently respectable financial advisors walk tall and only the little people pay taxes, this is the ideal book for you. Every politician and moneyman on the planet should read it, but they won...

An insider's sometimes shocking account of how Defense Secretary James Mattis led the US military through global challenges while serving as a crucial check on the Trump Administration.For nearly two years as Trump's Secretary of Defense, General Ja...

The Short and Tragic Life of Robert Peace
by Jeff Hobbs

A heartfelt, and riveting biography of the short life of a talented young African-American man who escapes the slums of Newark for Yale University only to succumb to the dangers of the streets—and of one’s own nature—when he return...