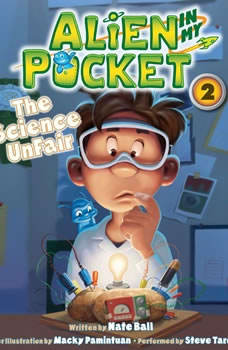 Alien in My Pocket: The Science UnFair

Ever since Amp crash-landed his spaceship through Zack McGee's bedroom window, Zack's life has gotten crazier and his grades have gone from bad to worse. Who has time for homework when there's an alien invasion to stop? But now Zack's up against his greatest challenge yet—the school science fair. If Zack doesn't get an A on his project, he's going to flunk the class. Luckily, Zack has Amp around to help, but when Zack's experiment turns out to be too good, he winds up in a whole different kind of trouble.Like every book in the Alien in My Pocket series, The Science UnFair mixes Common Core–aligned science and safe, hands-on experiments with hilarious stories that young readers will love.