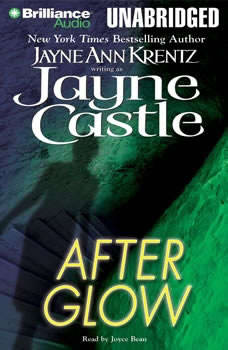 Dear Listener: Welcome back to my other world - the rules are a little different here. Life is complicated for Lydia Smith. She's working at that tacky, third-rate museum, Shrimpton's House of Ancient Horrors, trying to salvage her career in para-archaeology - and dating the most dangerous man in town. Just when she thinks she might be getting things under control, she stumbles over a dead body and discovers that her lover has a secret past that could get him killed. Just to top it off, there's trouble brewing underground in the eerie, glowing green passageways of the Dead City. Of course, all of these problems pale in comparison to the most pressing issue: Lydia has been invited to the Restoration Ball and she hasn't got a thing to wear. If, like me, you sometimes relish your romantic suspense with a paranormal twist, join me for After Glow. Sincerely, Jayne Ann Krentz, writing as Jayne Castle

Dante had been courting his victim in cyberspace for weeks before meeting her in person. A few sips of wine and a few hours later, she was dead. The murder weapon: a rare, usually undetectable date-rape drug with a street value of a quarter million ...