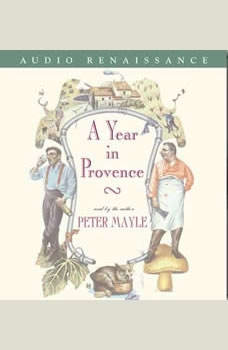 A Year in Provence

More than 40,000 listeners have enjoyed this story on cassette. Now anyone who's ever dreamed of getting away from it all can enjoy the charms and challenges of A Year in Provence on CD!Peter Mayle and his wife had been to Provence as tourists. They had dreamed of one day trading the long, gray winters and damp summers of England for the blue skies and sunshine of the coast of southern France. And then they made it happen. They moved into an old farmhouse at the foot of the Luberon mountains and embarked on a wonderful, if at times bewildering, new life. Among their experiences that first year: being inundated with builders and visitors, grappling with the native accent, taking part in goat races and supervising the planting of a new vineyard. Peter Mayle personally recounts the pleasures and frustrations of Provencal life--sharing in a way no one else can, the unique and endearing culture that is Provence.A Year in Provence was a New York Times bestseller for three years and won the British Book Awards' "Best Travel Book of the Year."

Corsets and Codpieces
by Karen Bowman

Have you ever wondered why we wear the type of clothes we do? Packed with outlandish outfits, this exciting history of fashion trends reveals the flamboyant fashions adopted (and discarded) by our ancestors.In the days before cosmetic surgery, peopl...

A Year in Provence
by Peter Mayle

More than 40,000 listeners have enjoyed this story on cassette. Now anyone who's ever dreamed of getting away from it all can enjoy the charms and challenges of A Year in Provence on CD!Peter Mayle and his wife had been to Provence as tourists. They...

Keep the Change
by Steve Dublanica

Tipping is huge in America. Almost everyone leaves at least one tip every day. More than five million American workers depend on them, and we spend $66 billion on tips each year. And everyone recognizes that queasy feeling - in bars and restaurants,...

My Twenty-Five Years in Provence
by Peter Mayle

The beloved author Peter Mayle, champion of all things Provence, here in a final volume of all new writing, offers vivid recollections from his twenty-five years in the South of France--lessons learned, culinary delights enjoyed, and changes observe...

The Dead Beat
by Marilyn Johnson

Marilyn Johnson was enthralled by the remarkable lives that were marching out of this world—so she sought out the best obits in the English language and the people who spent their lives writing about the dead. She surveyed the darkest corners...

A delightful, delicious, and best-selling account of the gustatory pleasures to be found throughout France, from the beloved author of A Year in Provence. The French celebrate food and drink more than any other people, and Peter Mayle shows us just ...

When Peter Mayle and his wife traded England's long, gray winters and damp summers for life in southern France, they entered an enchanting, wonderful, sometimes bewildering world. Now, share their adventures, pleasures, and frustrations: the joys a...

One Kiss or Two?
by Andy Scott

That's Not English
by Erin Moore