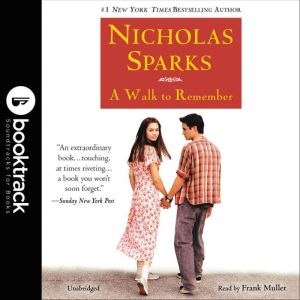 A Walk to Remember - Booktrack Edition

A Walk To Remember: Booktrack Edition adds an immersive musical soundtrack to your audiobook listening experience! * There was a time when the world was sweeter....when the women in Beaufort, North Carolina, wore dresses, and the men donned hats.... Every April, when the wind smells of both the sea and lilacs, Landon Carter remembers 1958, his last year at Beaufort High. Landon had dated a girl or two, and even once sworn that he'd been in love. Certainly the last person he thought he'd fall for was Jamie, the shy, almost ethereal daughter of the town's Baptist minister....Jamie, who was destined to show him the depths of the human heart-and the joy and pain of living. The inspiration for this novel came from Nicholas Sparks's sister: her life and her courage. From the internationally bestselling author Nicholas Sparks, comes his most moving story yet.... *Booktrack is an immersive format that pairs traditional audiobook narration to complementary music. The tempo and rhythm of the score are in perfect harmony with the action and characters throughout the audiobook. Gently playing in the background, the music never overpowers or distracts from the narration, so listeners can enjoy every minute. When you purchase this Booktrack edition, you receive the exact narration as the traditional audiobook available, with the addition of music throughout.