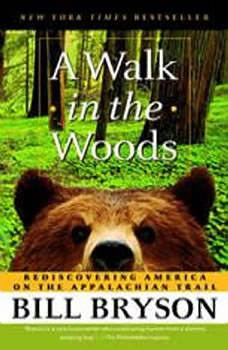 A Walk in the Woods: Rediscovering America on the Appalachian Trail

The Appalachian Trail trail stretches from Georgia to Maine and covers some of the most breathtaking terrain in America–majestic mountains, silent forests, sparking lakes. If you’re going to take a hike, it’s probably the place to go. And Bill Bryson is surely the most entertaining guide you’ll find. He introduces us to the history and ecology of the trail and to some of the other hardy (or just foolhardy) folks he meets along the way–and a couple of bears. Already a classic, A Walk in the Woods will make you long for the great outdoors (or at least a comfortable chair to sit and read in).

In a Sunburned Country
by Bill Bryson

Every time Bill Bryson walks out the door, memorable travel literature threatens to break out. His previous excursion along the Appalachian Trail resulted in the sublime national bestseller A Walk in the Woods. In A Sunburned Country is his report o...