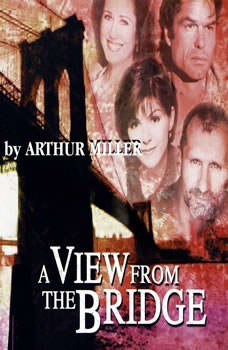 A View from the Bridge

Italian-American immigrant life in the 1950s textures this searing drama of love and revenge. Longshoreman Eddie Carbone is devoted to his wife, Beatrice and to his niece, Catherine. When Beatrices impoverished Sicilian cousins enter the U.S. illegally, in hope of finding work, Eddie gives them a helping hand. But when Catherine and one of the cousins fall in love, Eddies affection for his niece turns into obsession. Includes an interview with accomplished stage director Ethan McSweeny, whose resume includes an ongoing stint as the co-Artistic Director of the Chautauqua Theater Company. An L.A. Theatre Works full-cast performance featuring: Charles Cioffi as Alfieri Harry Hamlin as Marco Jamie Hanes as Rodolpho Mary McDonnell as Beatrice Peter Morse as Louis and others Ed O'Neill as Eddie Carbone Amy Pietz as Catherine Don Tieri as Mike and others Directed by Peter Levin.

An enigmatic young woman. A manipulative sister. Their brilliant father. An unexpected suitor. One life-altering question. The search for the truth behind a mysterious mathematical proof is the perplexing problem in David Auburn's dynamic play. Star...