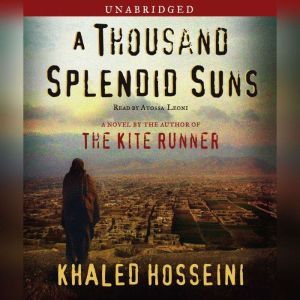 AFTER MORE THAN TWO YEARS ON THE BESTSELLER LISTS, KHALED HOSSEINI RETURNS WITH A BEAUTIFUL, RIVETING, AND HAUNTING NOVEL OF ENORMOUS CONTEMPORARY RELEVANCE. A Thousand Splendid Suns is a breathtaking story set against the volatile events of Afghanistan's last thirty years -- from the Soviet invasion to the reign of the Taliban to post-Taliban rebuilding -- that puts the violence, fear, hope and faith of this country in intimate, human terms. It is a tale of two generations of characters brought jarringly together by the tragic sweep of war, where personal lives -- the struggle to survive, raise a family, find happiness -- are inextricable from the history playing out around them. Propelled by the same storytelling instinct that made The Kite Runner a beloved classic, A Thousand Splendid Suns is at once a remarkable chronicle of three decades of Afghan history and a deeply moving account of family and friendship. It is a striking, heartwrenching novel of an unforgiving time, an unlikely friendship, and an indestructible love -- a stunning accomplishment.