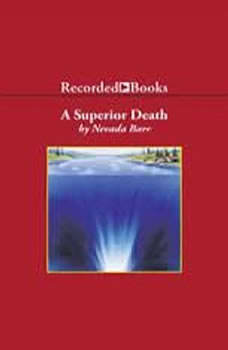 Nevada Barr quickly attracted the attention of mystery fans when her first Anna Pigeon mystery, Track of the Cat, appeared. Now she immerses the intrepid park ranger in a perilous search that will take her far below the waters of Lake Superior. As Anna spends her days patrolling its shores, the surface of Lake Superior fills with tourists. In the depths below lie an ancient ship and the bones of its sailors. But when two tourists dive down to see the wreck, they discover that a new body has joined the skeletal crew. As Anna tries to discover how and why, she encounters secrets darker and more deadly than the waters surrounding the corpse. Filled with suspense, A Superior Death is also laced with Anna Pigeon’s self-deprecating humor. With Barbara Rosenblat’s spirited narration, you’ll immediately be scanning the splendid setting and looking for clues through the eyes of the savvy naturalist.

The Rope
by Nevada Barr

Anna Pigeon has been a ranger with the National Park Service for many years, but she had a very different life before tragedy sent her west seeking something new. Now Nevada Barr finally tells the previously untold story of Anna’s first foray ...

Desert Heat
by J. A. Jance

A cop lies dying beneath the blistering Arizona sun—a local lawman who may well have become the next sheriff of Cochise County.?The police brass claim that Andy Brady was dirty, and that his shooting was a suicide attempt. Joanna Brady, his d...

The Winner
by David Baldacci

#1 NEW YORK TIMES BESTSELLERAn incredible new page-turner from thriller master David Baldacci...THE DREAMShe is twenty, beautiful, dirt-poor, and hoping for a better life for her infant daughter when LuAnn Tyler is offered the gift of a lifetime, a...