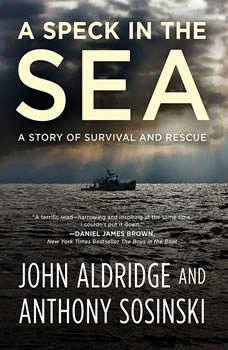 A Speck in the Sea: A Story of Survival and Rescue

The harrowing adventure-at-sea memoir recounting the heroic search-and-rescue mission for lost Montauk fisherman John Aldridge, which Daniel James Brown calls "A terrific read."I am floating in the middle of the night, and nobody in the world even knows I am missing. Nobody is looking for me. You can't get more alone than that. You can't be more lost. I've got too many people who love me. There's no way I'm dying like this.In the dead of night on July 24, 2013, John Aldridge was thrown off the back of the Anna Mary while his fishing partner, Anthony Sosinski, slept below. As desperate hours ticked by, Sosinski, the families, the local fishing community, and the U.S. Coast Guard in three states mobilized in an unprecedented search effort that culminated in a rare and exhilarating success.A tale of survival, perseverance, and community, A Speck in the Sea tells of one man's struggle to survive as friends and strangers work to bring him home. Aldridge's wrenching first-person account intertwines with the narrative of the massive, constantly evolving rescue operation designed to save him.