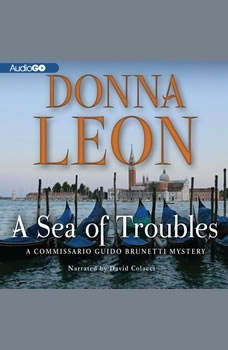 A Sea of Troubles

Dona Leon has amassed devoted fans around the world for her atmospheric and intelligent Commissario Brunetti series. A Sea of Troubles offers a rare glimpse into the scrupulous Commissario's personal life. When Brunetti investigates the murder of two local fishermen on the island of Pellestrina, the small community closes ranks, forcing him to accept Signorina Elettra's offer to visit her relatives there to search for clues. Though loyal to his beloved wife, Paola, he must admit that less-than-platonic emotions underlie his concern for his boss's beautiful secretary. Suspenseful, provocative, and deeply unsettling, A Sea of Troubles is an explosive and irresistible addition to Leon's marvelous series.

A Sea of Troubles
A Commissario Guido Brunetti Myster...