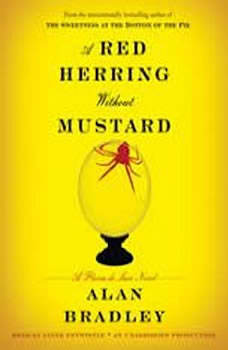 A Red Herring Without Mustard: A Flavia de Luce Novel

Award-winning author Alan Bradley returns with another beguiling novel starring the insidiously clever and unflappable eleven-year-old sleuth Flavia de Luce. The precocious chemist with a passion for poisons uncovers a fresh slew of misdeeds in the hamlet of Bishop’s Lacey—mysteries involving a missing tot, a fortune-teller, and a corpse in Flavia’s own backyard.

Flavia had asked the old Gypsy woman to tell her fortune, but never expected to stumble across the poor soul, bludgeoned in the wee hours in her own caravan. Was this an act of retribution by those convinced that the soothsayer had abducted a local child years ago? Certainly Flavia understands the bliss of settling scores; revenge is a delightful pastime when one has two odious older sisters. But how could this crime be connected to the missing baby? Had it something to do with the weird sect who met at the river to practice their secret rites? While still pondering the possibilities, Flavia stumbles upon another corpse—that of a notorious layabout who had been caught prowling about the de Luce’s drawing room.

Pedaling Gladys, her faithful bicycle, across the countryside in search of clues to both crimes, Flavia uncovers some odd new twists. Most intriguing is her introduction to an elegant artist with a very special object in her possession—a portrait that sheds light on the biggest mystery of all: Who is Flavia?

As the red herrings pile up, Flavia must sort through clues fishy and foul to untangle dark deeds and dangerous secrets.

The Brutal Telling
by Louise Penny

As autumn descends upon Three Pines, a stranger is found murdered in the village bistro and antiques store at the center of town. No one admits to knowing the murdered man, but as secrets are revealed, chaos begins to close in on the beloved bistro ...

A Fatal Grace
by Louise Penny

Winner of the 2007 Agatha Award for Best Novel!Welcome to winter in Three Pines, a picturesque village in Quebec, where the villagers are preparing for a traditional country Christmas, and someone is preparing for murder.No one liked CC de Poitiers....

As Chimney Sweepers Come to Dust
by Alan Bradley

Winner of the New Blood Dagger, Arthur Ellis, Barry, Anthony, and Dilys awards.Chief Inspector Armand Gamache of the Surete du Quebec and his team of investigators are called in to the scene of a suspicious death in a rural village south of Montreal...

The Mapping of Love and Death
by Jacqueline Winspear

In the latest mystery in the New York Times bestselling series, Maisie Dobbs must unravel a case of wartime love and death—an investigation that leads her to a long-hidden affair between a young cartographer and a mysterious nurse.August 1914...

A Red Herring Without Mustard: A Fl...
Flavia de Luce #3