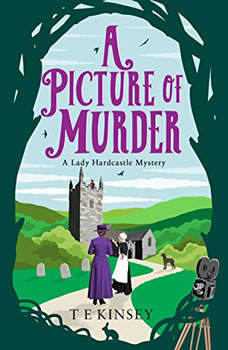 A Picture of Murder

Late October 1909, and the season of ghouls and things that go bump in the night has descended on the village of Littleton Cotterell.Lady Hardcastle and her trusted lady’s maid, Florence, find themselves hosting a colourful cast of actors whose spooky moving picture, The Witch’s Downfall, is being shown to mark Halloween. But things take a macabre turn when the first night’s screening ends with a mysterious murder, and the second night with another…One by one the actors turn up dead in ways that eerily echo their film.With the police left scratching their heads, Lady Hardcastle calls upon her amateur sleuthing skills to launch an investigation, with Flo’s able assistance. Surrounded by suspects both human and supernatural, Lady Hardcastle must use a little trickery of her own to unmask the murderer.

Handbook for Homicide
by Lorna Barrett

A Picture of Murder
A Lady Hardcastle Mystery #4

The Burning Issue of the Day
A Lady Hardcastle Mystery #5

Death Beside the Seaside
A Lady Hardcastle Mystery #6