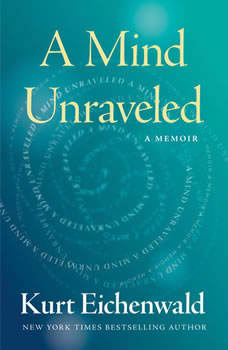 A Mind Unraveled: A Memoir

The compelling story of an acclaimed journalist and New York Times bestselling author’s ongoing struggle with epilepsy—his torturous decision to keep his condition a secret to avoid discrimination, and his ensuing decades-long battle to not only survive, but to thrive.

As a college freshman, Kurt Eichenwald awoke one night on the floor of his dorm room, confused and in pain. In the aftermath of that critical moment, his once-carefree life would be consumed by confrontations with medical incompetence, discrimination that almost cost him his education and employment, physical abuse, and dark moments when he contemplated suicide.

This is the story of one man’s battle to pursue his dreams despite an often incapacitating brain disorder. From his early experiences of fear and denial to his exasperating search for treatment, Eichenwald provides a deeply candid account of his years facing this misunderstood and often stigmatized condition. He details his encounters with the doctors whose negligence could have killed him, but for the heroic actions of a brilliant neurologist and the family and friends who fought for him.

Many of Eichenwald’s recollections are drawn from his diaries, vivid and painstakingly kept records that helped sharpen his skills as a journalist. He raises important questions about the nature of memory, the revelations of brain science, and the profound mysteries of human perception.

Ultimately, A Mind Unraveled is an inspirational story, one that chronicles how Eichenwald, faced often with his own mortality, transformed trauma into a guide for reaching the future he desired. Defying relentless threats to his emotional and physical well-being, he affirmed his decision to never give up, and in the process learned how to rise from the depths of despair to the heights of unimagined success.

Praise for A Mind Unraveled

“A Mind Unraveled reads like a medical thriller, at times truly frightening but also deeply inspiring. This book will make me think differently as a doctor. Kurt Eichenwald is a tremendously talented writer. When you travel on his personal journey, it is pure gold.”—Sanjay Gupta, M.D., chief medical correspondent, CNN

“This book absolutely floored me. It’s a medical mystery unlike any I’ve read before, with a propulsive narrative. Trust me, you won’t be able to put it down.”—Bryan Burrough, New York Times bestselling author of Barbarians at the Gate