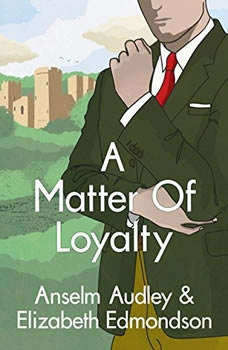 A Matter of Loyalty

January 1954. Mists cover the hills around Selchester. Someone at the research facility known as the Atomic is leaking secrets to Soviet Russia, and when nuclear scientist Bruno Rothesay goes missing, the British Intelligence Services are convinced he’s the mole. Hugo Hawksworth isn’t so sure. Then a body turns up, and Hugo’s instincts are proven correct. But if Rothesay wasn’t selling secrets to the Soviets, who is?As Hugo digs deeper into buried connections and unlikely coincidences, he knows there’s more to this case than his London superiors believe. But following his instincts will pit him against the Establishment—and tangle him once again in the poisonous legacy of the late Lord Selchester.As he closes in on the truth, Hugo finds himself confronted by an adversary who will stop at nothing, in a case that will prove the most personal of his career.With a touch of Downton Abbey, a whisper of Agatha Christie and a nod to John Le Carré, A Matter Of Loyalty is the third and final book in this delightfully classic and witty murder-mystery series.

A Matter of Loyalty
A Very English Mystery #3

Man of Some Repute, A
A Very English Mystery #1

Question of Inheritance, A
A Very English Mystery #2