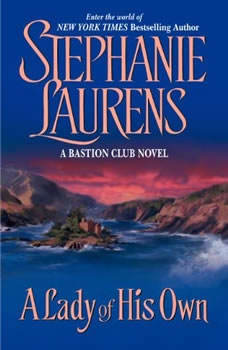 A Lady of His Own

Stephanie Laurens’ scandalous fiction is savored by romance addicts around the WD who can’t get enough of her dashing rakes and ravishing debutantes. This sultry addition to her New York Times best-selling Bastion Club series presents an unforgettable tale of rekindled love and unbridled passion. As betrayal and intrigue swirl around her, Lady Penelope finds herself inexorably drawn into the strong arms of the man she cannot resist.

Growing up with four unruly brothers has made Freyja Bedwyn far bolder than most society ladies. From feisty manner to long, tumbling hair, Lady Freyja is pure fire—a woman who seeks both adventure and freedom. Adventure soon finds her on a v...

Like all the Bedwyn men, Aidan has a reputation for cool arrogance. But this proud nobleman also possesses a loyal, passionate heart—and it is this fierce loyalty that has brought Colonel Lord Aidan to Ringwood Manor to honor a dying soldier's...

A Lady of His Own
The Bastion Club Novels #3

To Distraction
The Bastion Club Novels #5