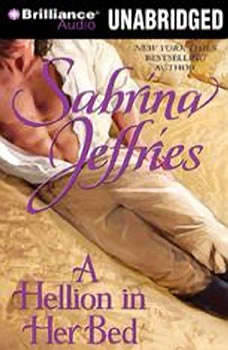 A Hellion in Her Bed

Mired in scandal after his parents’ mysterious deaths, notorious gambler Lord Jarret Sharpe agrees to tamely run the family brewery for a year if his Machiavellian grandmother rescinds her ultimatum that he marry. But the gambler in him can’t resist when beguiling Annabel Lake proposes a wager. If she wins their card game, he must help save her family’s foundering brewery. But if he wins, she must spend a night in his bed. The outcome sets off a chain of events that threatens to destroy all his plans…and unveils the secret Annabel has held for so long. When Jarret discovers the darker reason behind her wager, he forces her into another one—and this time he intends to win not just her body, but her heart.

How to Capture a Countess
by Karen Hawkins

Urged by her favorite nephew, the intimidating Duchess of Roxburghe agrees to transform a thorny Scottish rose into a lovely bloom. But even she isn't prepared for fiery Rose Balfour. At seventeen, Rose fell wildly in love with Lord Alton Sinclair,...

One ranch. Three sons. Only one will inherit...and on one condition. Tired of waiting for his sons to settle down, Arizona-territory rancher Angus McKettrick announces a competition: the first son to marry and produce a grandchild will inherit Tripl...

The Scent of Jasmine
by Jude Deveraux

Would you risk your life—on the love of a lifetime? Charleston, 1799: A daughter of Southern gentility and a gifted painter, Catherine Edilean Harcourt has no lack of suitors at home in Virginia, waiting to fulfill her dream of marriage and fa...

Stranger in the Moonlight
by Jude Deveraux

An enchanting new contemporary romance set in Edilean, about two childhood friends who are reunited after years apart, only to discover that the spark they felt even as kids still remains...In the second novel in her bestselling Edilean trilogy...

Moonlight in the Morning
by Jude Deveraux

In an all-new trilogy set in blissful Edilean, Virginia, Jude Deveraux weaves together the tales of three young women, best friends since college, and the lives, loves, and dreams that await them. Sparks are flying between Jecca Layton and Dr. Trist...

A Hellion in Her Bed
Hellions of Halstead Hall Series #2

To Wed a Wild Lord
Hellions of Halstead Hall Series #4