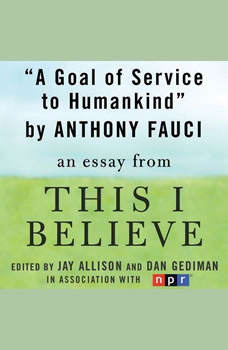 A Goal of Service to Humankind: A "This I Believe" Essay

Dr. Anthony Fauci reflects on the meaning of knowledge, excellence, and service in his life in "A Goal of Service to Humankind", his contribution to NPR’s This I Believe series.

A Goal of Service to Humankind: A "...
This I Believe