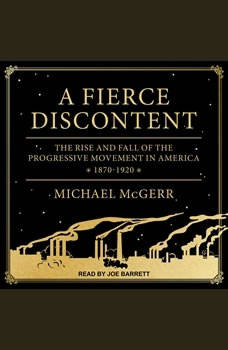 A Fierce Discontent: The Rise and Fall of the Progressive Movement in America, 1870-1920

The Progressive Era witnessed the nation's most convulsive upheaval, a time of radicalism far beyond the Revolution or anything since. In response to the birth of modern America, one small group of middle-class Americans seized control of the nation and attempted to remake society from bottom to top. They accomplished an astonishing range of triumphs, yet the progressive movement collapsed as the war came to an end amid race riots, strikes, high inflation, and a frenzied Red scare. Michael McGerr argues the expectations raised by the progressives' utopian hopes have nagged at us ever since. Our current, less-than-epic politics must inevitably disappoint a nation that once thought in epic terms. The New Deal, World War II, the Cold War, the Great Society, and now the war on terrorism have each entailed ambitious plans for America. But the failure of the progressive movement set boundaries around the aspirations of all of these efforts. None of them was as ambitious, as openly determined to transform people and create utopia, as the progressive movement. We have been forced to think modestly ever since that age of bold reform. For all of us, right, center, and left, the age of "fierce discontent" is long over.