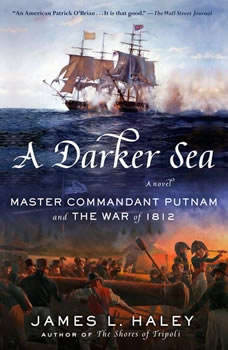 A Darker Sea: Master Commandant Putnam and the War of 1812

The second installment of the gripping naval saga by award-winning historian James L. Haley, featuring Commander Bliven Putnam, chronicling the build up to the biggest military conflict between the United States and Britain after the Revolution—the War of 1812.

At the opening of the War of 1812, the British control the most powerful navy on earth, and Americans are again victims of piracy. Bliven Putnam, late of the Battle of Tripoli, is dispatched to Charleston to outfit and take command of a new 20-gun brig, the USS Tempest. Later, aboard the Constitution, he sails into the furious early fighting of the war.

Prowling the South Atlantic in the Tempest, Bliven takes prizes and disrupts British merchant shipping, until he is overhauled, overmatched, and disastrously defeated by the frigate HMS Java. Its captain proves to be Lord Arthur Kington, whom Bliven had so disastrously met in Naples. On board he also finds his old friend Sam Bandy, one of the Java's pressed American seamen kidnapped into British service. Their whispered plans to foment a mutiny among the captives may see them hang, when the Constitution looms over the horizon for one of the most famous battles of the War of 1812 in a gripping, high-wire conclusion. With exquisite detail and guns-blazing action, A Darker Sea illuminates an unforgettable period in American history.

The Devil in Paradise
A Bliven Putnam Naval Adventure #3